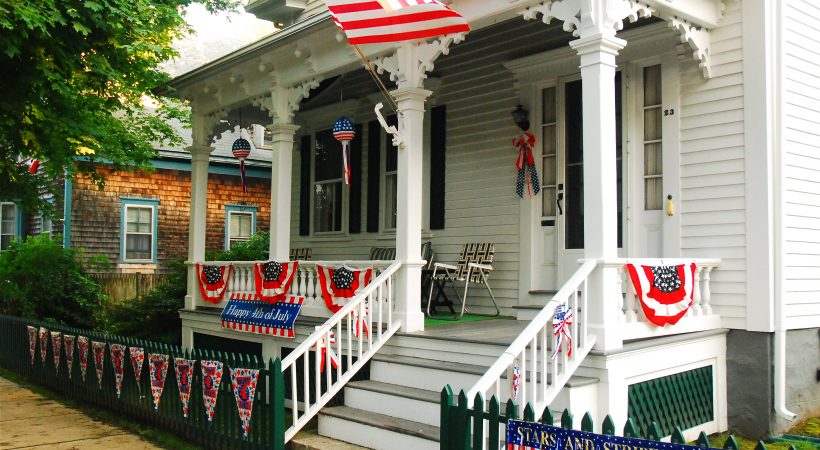 You don’t always have to go outside to celebrate 4th July. There are a ton of activities which you can do from the comfort of your home. For example, you could bake patriotic red, blue, and white desserts. The family can join in on preparing some 4th July cakes, brownies, and cupcakes. You could also start a barbecue. Just fire up the grills and make some burgers and hotdogs. No party is complete without great music, so get someone to play a patriotic tune on the guitar while everybody else sings along. Games are always a great way to keep your spirits up. You can play a trivia revolving around 4th July and some of the significant events in America’s history. To top it all off, you could grab a patriotic movie to watch in the evening.

Are you an art lover? A tour to the Portland Museum of Art is a great way to spend 4th July. The Portland Museum of Art houses works of icons such as Andy Warhol, Winslow Homer, and Claude Monet, among others. The museum also has an extensive collection of contemporary, American, and European works, as well as collections by Maine Artistes. You will also find sketches, Photographs, sculptures, ornate silverware, pottery, furniture, and so much more. With over 18,000, you will be hard-pressed not to find something interesting to view. The collection at the Portland Museum of Art is so big that it would take you approximately ten years of continuous gallery rotations to view all the items in the museum. The museum also has a store and a cafe on-site.

The Portland Museum of Art is located about half a mile southwest of Old Port, near downtown Portland. Public parking is available for a fee on the streets around the museum. The museum is open during the regular hours from 10 am to 6 pm. Admission is free for members and people under 21 years, $18 for adults and $15 for seniors and students.

This list is not meant to be exhaustive, but rather as a guide on some of the activities you can do on 4th July in Portland, Maine to celebrate America’s Independence. There are a handful of other places to visit, sites to see, and activities that you can do at home. Regardless of how you chose to celebrate 4th July, it is important to take a moment and reflect on how far America has come. It is essential to appreciate the sacrifices, struggles, and triumphs of those who came before us, and to live by the founding documents drafted by our forefathers that made our nation the greatest nation on earth.

Since 1941, the 4th of July or Independence day has been a federal holiday in the US. However, the tradition of hosting celebrations on the 4th of July dates back to the American Revolution of the eighteenth century. The continental congress voted for America’s independence on 2nd July 1776, and the thirteen colonies adopted the historic declaration of independence (drafted by Thomas Jefferson) 2 days later. It was then that America was born. From 1776 to date, various celebrations have been held in America to commemorate the historic event. These celebrations range from family gatherings and barbeques, parades, concerts to fireworks.

In present-day Portland, people participate in various activities to commemorate Independence Day. Some of these activities include watching fireworks on Eastern Promenade, a trip to Narrow Gauge Museum, waterfront train rides and boat cruises along Casco Bay, Old Port walking tour, barbeques, baking patriotic desserts and much more. Above everything else, the best thing we can do on 4th July is to celebrate. Celebrate the birth of America, celebrate the rights we enjoy but too often take for granted, Celebrate the sacrifices of those who came before us, and appreciate the fact that we also have a role to play in determining the direction our nation will take next.

Traditionally, fireworks celebrations on the 4th of July have been one of the common activities across America. In Portland, Maine, the situation is no different. 4th of July fireworks celebrations are usually held on Eastern Promenade. The annual event is usually free to attend, and thousands of people from across Portland attend. It is characterized by the presence of a lot of picnic spots and food vendors on the grassy hill, and the Casco Bay usually fills with people watching the fireworks on boats.

Other than being a time to celebrate America’s independence, the event also provides a commercial opportunity for vendors to sell food, souvenirs, and various merchandise. On 4th July 2019, the firework celebration was accompanied by a treat from the Portland Symphony Orchestra as well as JPMCB. This was not the first time that Portland Symphony Orchestra has made a performance during the 4th July fireworks celebrations. For many years since 2010, they have entertained the audience before and during the event.

However, in 2020, the event was canceled as a safety measure against the spread of COVID-19. City Manager of Portland, Jon Jennings, announced that he had no option but to cancel the event because the State of Maine had forbidden social gatherings of over 50 people. Budget constraints were another reason why the event was canceled. According to Portland’s spokesperson Jessica Grondin, the city did not have sufficient funds to hold 4th July celebrations in 2020. Following these two events, the celebrations have been rescheduled to 4th July 2021.